EPTI has years of experience passionately supporting students to become the most prepared, confident, skilled and knowledgeable new PTs in the industry.

EPTI students are guaranteed immediate job interviews with big name gyms around the world – based on the high quality and readiness of previous students.
Get the knowledge. Master the skills. Feel completely supported and confident. Get straight to work as a fitness professional!

>> HOW TO ACE A PT JOB INTERVIEW 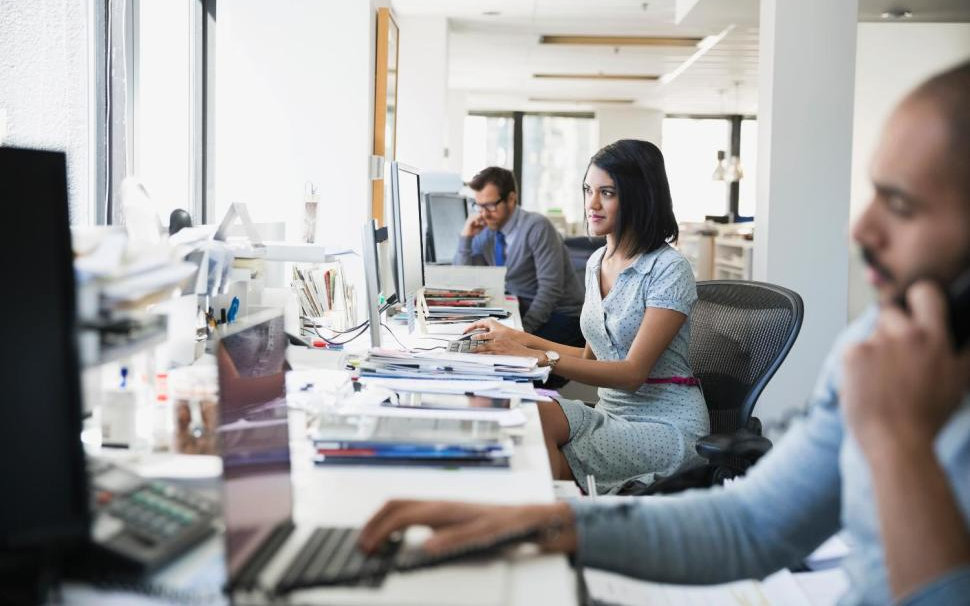 A Lancet study comprising of more than 1 million people has found that the health risks associated with sitting for long periods of the day can be reduced or even eliminated by regular physical activity.

The research, using the data of people from the USA, Western Europe and Australia was carried out in response to rising concerns about the health risks associated with society’s shift towards a more sedentary lifestyle. With more and more of the population employed in office based jobs, there’s a greater number of people that cannot escape sitting at their desks for prolonged periods of time.

Physical inactivity is linked to higher risks of diabetes, heart disease and some cancers and is associated with more than 5 million deaths per year.

The good news is that the increased risk of death associated with sitting for 8 hours a day can be reduced or even eliminated for those that did a minimum of 1 hour physical activity (such as brisk walking or cycling) per day.

60-75 minutes of moderate activity is ideal to combat the effects of sitting for long periods of time, but if this is not possible, then at least doing some exercise each day can help reduce the risk.

This study therefore underlines the fundamental importance of physical activity to health, no matter how many hours an individual spent sitting.

The World Health Organisation recommend that adults do 150 minutes of physical activity per week, which is much lower then the 60-75 minutes identified in the study. Rather alarmingly, the need for progress has been highlighted by the study however, as it reveals that only 25% of those people analysed were active for an hour or more each day.

Read more about the impact to health from a sedentary lifestyle in my earlier blog:
“HOW SITTING IS WORSE FOR YOUR HEALTH THAN SMOKING”

If you’ve ever wondered what happens on the practical part of a Fitness course - look no further!
Here is a VLOG giving you a snapshot of Day ONE on an EPTI Personal Trainer Diploma practical course.

You will get a “feel” for the atmosphere and excitement that all of our students (and tutors) experience during their time with us. Watch to the end for some photos showing the rest of the course. Enjoy! Caroline

I understand that choosing the right personal training course is a tough decision... I went through the same process almost 20 years ago now when I was in the same position as you.

The part of I found the hardest and most tedious was wading through the sales patter of the various different training providers that I enquired with.

Our aim is for the course to speak for itself and if you take time to read or watch our past students' feedback, then I'll let you decide as to whether we've been successful in achieving that objective. 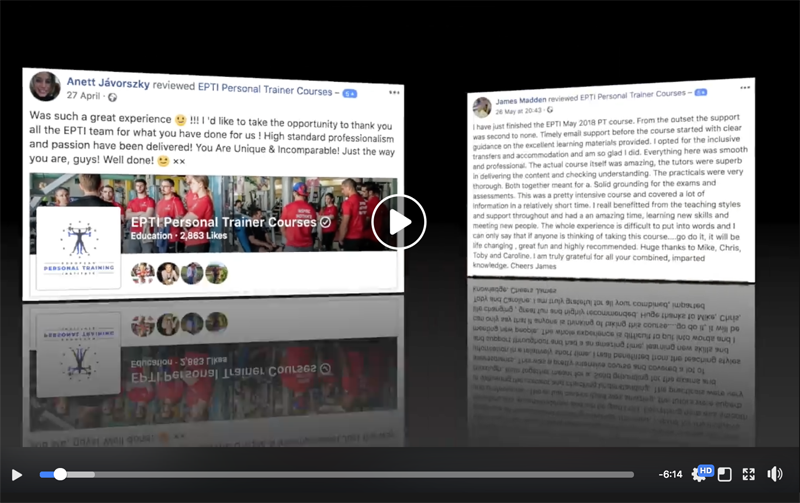 Students travel from all over the world to attend EPTI PT Diploma practical courses.
The feedback we receive is pretty amazing!... 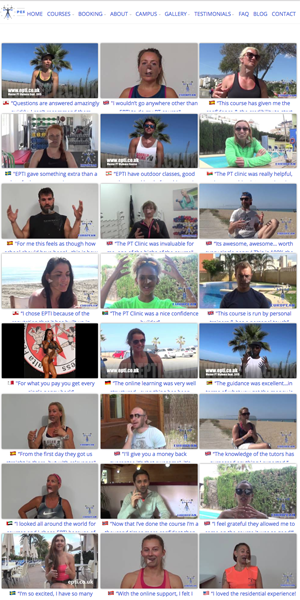 One of the biggest fears and doubts that potential students have when I speak to them on the telephone before they sign up for a course, is whether they will “make it” as a personal trainer once they graduate.

Maybe this is what you are thinking right now?

You’ve read the motivational quotes… “If you do what you love, you'll never work a day in your life” and this idea sounds great. You really want to follow your passion and do something that you love, but what it really comes down to is, “Can I make a career out of training people for money, will clients really pay to train with ME?”

Well, as I said before, I’ve had this conversation with countless students over the years. It is true, many personal trainers do fall by the wayside and never reach their potential within the industry - they maybe didn’t get the results they’d hoped for with their clients, or maybe they struggled to find enough clients...there are many reasons for this, but usually it’s because they chose a certification that cut corners, that only offered the minimum in terms of providing an assessment which didn’t prepare them for the role of a personal trainer once they had their certificate in hand.